By: Maxwell I. Gold

Supernatural horror literature or weird fiction has been around as long as mankind has had the ability to fear those ancient horrors that lurk in the darkness of the night. Howard Phillips Lovecraft famously said that “the oldest and strongest emotion of mankind is fear, and the oldest and strongest kind of fear is the fear of the unknown.”

As a literary genre, however weird fiction is a little over two hundred and fifty years old with many well-known names that have persisted to keep its form and material alive. H.P. Lovecraft, Edgar Allan Poe, Lord Dunsany, Robert E. Bloch and many more have contributed to the immense and weirdly diverse spectrum of supernatural horror fiction. The subject-matter, while greatly underrated in comparison to other literary forms, has held a vast shadowy influence in literary fiction. With deep-rooted psychological, philosophical, and social implications that are explored in many of these tales, weird fiction does indeed hold a pale bright light as an intellectually stimulating form of literary art.

Recently, I had the pleasure of speaking with supernatural horror literarian and Lovecraft scholar, S.T. Joshi about his views on the importance of weird fiction as a serious literary art. Joshi has spent his life chronicling the history of weird fiction, its beginnings as well as penning the famous biography ‘I am Providence: The Life and Times of H.P. Lovecraft’..

Joshi, like many others during his time began reading science fiction, fantasy and horror, however he “soon put aside science fiction, chiefly because I was not much interested in or had much knowledge of science at the time, and in any case was not keen on envisioning future societal or technological scenarios.” His sentiments were similar to fantastical fiction as it “seemed too remote from the concerns of the world as we know it.”

Fear is an innately ancient emotion and all weird authors have endeavored to explore this fascinating conundrum as to why we fear what lurks in the darkness under our beds, or in the peripherals of our thoughts. Joshi said very curiously in regards to his interest of horror, “to this day I do not fully understand why I wish to be frightened—even vicariously. Whatever the case, I early began to sense that horror fiction (or, as I prefer to call it, weird fiction) was indeed a genuine (if relatively narrow) contribution to literature: it was not merely escapist fiction for those who wanted to “avoid” the complexities of present-day reality. I sensed that weird fiction was held in low esteem by the majority of literary critics, and came to regard this as a critical blind spot that needed to be rectified.”

The idea that weird fiction as an underrated literary genre is one that Joshi and many others have worked tirelessly to change. His many literary criticisms of H.P.Lovecraft’s writings including one of his works, Primal Sources, explore much of the material and literary philosophies behind Lovecraft and weird fiction.

As mentioned earlier, weird fiction is not new, however weird fiction as we know it as a genre did not come about until around 250 years ago. According to one of Joshi’s more recent works, Unutterable Horror: A History of Supernatural Fiction, it was not until the publication of Horace Walpole’s Castle of Otranto in 1764 that weird fiction was actually established as a genre of literary fiction. Lovecraft echoes that the Gothic era of romantic fiction is also where the origin’s of the weird tale begin.

With reference to the many authors who have continued and left such a legacy, Joshi’s words were very memorable. “The great authors who have followed—Poe, Bierce, Lovecraft, Machen, Dunsany, Blackwood, Campbell, and so many others—really comprise a tremendous literary legacy that all devotees of the genre owe it to themselves to explore. By doing so they will learn that many of the motifs that contemporary weird writers use (such as the vampire, the ghost, the haunted house, etc.) have a very long lineage.”

H.P. Lovecraft for those who are not aware has often been cited as a seminal figure in supernatural horror literature. Much of his influence came posthumously and has even been said by many modern horror writers such as Neil Gaiman that Lovecraft “set the stage for which the modern horror novel would be written.”

“Lovecraft really was a critical figure in weird fiction.” Joshi continued. “He emerged at a time when many other great writers were doing their work (he was a slightly later contemporary of Arthur Machen, Lord Dunsany, Algernon Blackwood, M. R. James, Walter de la Mare, and a number of other leading figures), so that he contributed to what has properly been termed the ‘golden age’ of weird fiction.”

Lovecraft came about at an interesting time in the evolution of weird literature as well as in the early stages of science fiction. He was very well-read in science, philosophy, and extremely knowledgable so this allowed him to more easily articulate these weird motifs. Joshi continues to say how “Lovecraft therefore felt the need to create a new kind of monster (or, more generally, a new weird scenario), involving an invented mythology of highly original entities emerging from the depths of space. In so doing, he created a bridge between conventional weird fiction and the emerging genre of science fiction.”

The “response was overwhelming” and it inevitably lead to many of his colleagues as well as other writers of the day creating and imitating his work. The famous ‘Cthulu Mythos’ has held a profoundly dark and ever-growing shadow over weird fiction. “Even other writers not writing specifically in the Lovecraftian vein were influenced.” Joshi added.

“And because Lovecraft was both a creative writer and a theoretician of weird fiction, his views on the nature and function of the genre eventually began to affect the course of weird fiction itself. It is true that the surprising emergence of weird fiction as a bestselling phenomenon  in the 1970s represented a kind of reversion to those standard outmoded motifs, but even these were utilised in a somewhat more original way.Today, no weird writer can avoid Lovecraft’s shadow—even if it means writing work that is explicitly non-Lovecraftian.” He concluded.

I asked him about the importance of teaching weird fiction in schools, at both high school and college level literature courses and of course his answer was expectedly enthusiastic. “I emphatically believe that weird writing of the past century should be taught at the high school and college level. The number of great writers is almost too numerous to mention.” he said.

Joshi proceeded to talk about how we are in ‘a kind of silver age of weird fiction.’ Shirley Jackson, Richard Matheson, Ray Bradbury,  and Charles Beaumont were some of the writers he spoke of. .

Modern weird fiction has much to work towards, however if there is something that will remain a constant. The shadow of Lovecraft’s influence no matter what the next age of weird fiction holds, will be a dark fixture in this literary cosmos. 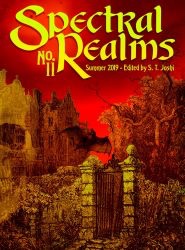 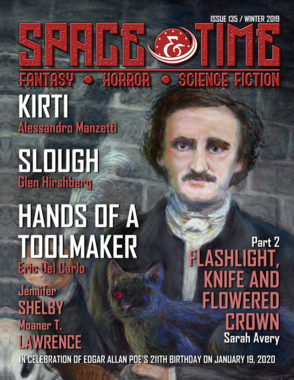 "From the depths of burning Time, dead stars fall, into the Wells."